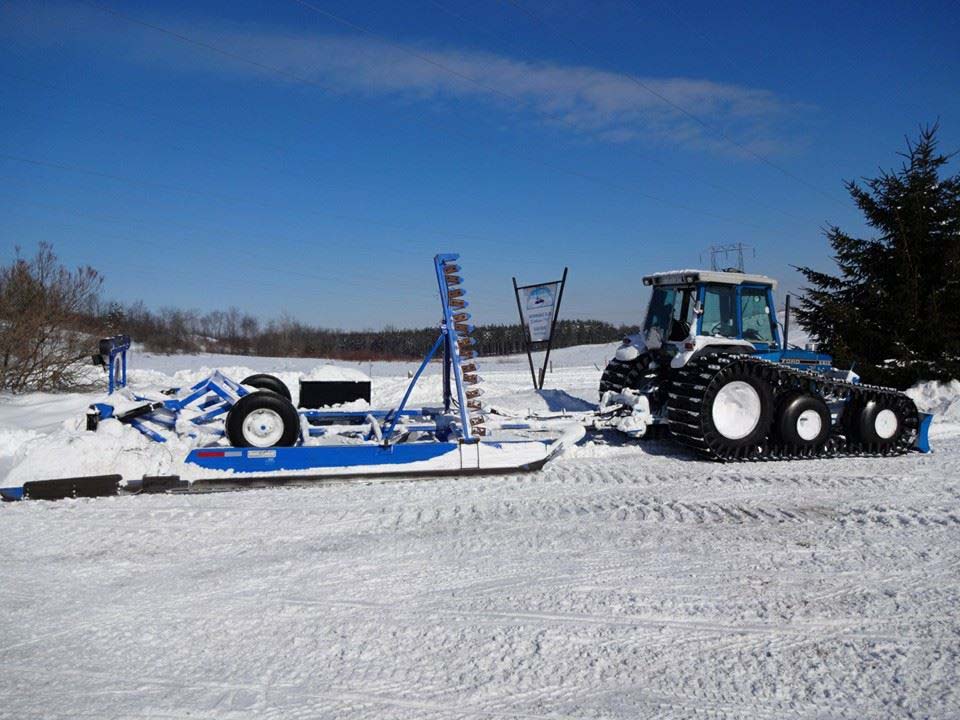 As I sat down with the “night shift” from the Long Sault Ridge Runners, one could only feel at ease with the comradory the guys had with one another. So much experience and history just sitting round the garage. The Long Sault Ridge Runners have been grooming the E108 trail round the 35/115 for over 25+ years now. Their little team consists of a couple of rookie’s and a few more experienced men, one of those being a current landowner. They have Harry Schillings, he is the land owner, Keevan McCrum one of the three long time members; Lorne Thompson, who currently is the district governor for this area and Paul Losier, he is “the egg man” on pancake breakfast day at the club, he also takes care of their clubhouse. The two rookies are Dan Coty a newly deputized “trail warden” and Wayne Brooks; he is the current president of the Long Sault Ridge Runners Snowmobile Club.

They don’t really have a nickname for their team, but some of the members have been calling them the “Mogul Mashers”, since that is truly what they do. Long Sault is not only responsible for their club trails; they also have some of the famous E108 trail. The team grooms 4 times a week during their peak season. “The trail is widely known and is used constantly, there is no real time zone for a snowmobile”, Wayne says. With a 125 klms of trail and doing this 4 times a week that’s a lot of “mashing”
Sitting beside the 6610 & 7710 ford groomers, one has to ask – why do you do it? Harry, one of the more experience groomers turns to Keevan and says “for the peace and quiet don’t you agree?” Keevan nods in agreement saying he could remember back when they used a little snowmobile and bed springs to get the trails done. I asked “have you had the new groomers long?” Lorne pipes up and says “heck no, those are Cadillac’s compared to the groomers they had prior”. He used to groom the trails with what they called a “bobby”. That’s when Harry spoke up and said, “Hey Lorne do you remember the time when the bobby went through the two trees and the grooming blade didn’t?” Rubbing his forehead answers “Sure do papa smurff, sure do”. I went over to the smaller groomer and slowly running my hand along the track; I ask – “so who drives this one?” Dan (one of the rookies) spoke up then, “we all do except Harry, and he drives the big one”. Lorne then one recanted a memory while riding the “big one” that I am sure Harry wanted to forget. Saying that he remembers when Harry said “we didn’t need to go through Dobson’s field, that we could easily groom the hill along the fence”. That was until he slid the whole groomer unit down the side of this hill and rolled off a track let alone almost rolling the groomer over. I am sure he needed a change of underwear after that ordeal because after that we got permission from Dobson to cross his field “So what’s the biggest challenge that any of you face?” “Oh I can answer that one” Harry says. “It’s Lorne (I thought it was a pile of dirt) Thompson. Everyone laughed, I looked over and there Lorne was shaking his head. “You make one mistake and they remember it forever”. By the time I ended the interview my sides hurt, this group indeed carried a strong bond of friendship and commradory. They do it because of the love for the sport. They believe that they are not just a club they are part of a community, one that is shared and cared by the blood, sweat and backbone of their volunteers.